In order to carry out virus detection tests in the field using paper-based microfluidics technology, R&D Vision has jointly developed a fluorescence signal analysis sensor with IPGG (partnership between MMN and the Pasteur Institute).

The prototype has 2 excitation sources, a detection strip and an optical and opto-mechanical unit to shape beams and optimise the signal-to-noise ratio. It is all housed in a case to allow rapid deployment.

The first results have shown that it is possible to diagnose the Ebola virus in 30 minutes at an early stage of its development.

Studies are in progress to confirm this result and develop other tests based on an equivalent principle in order to diagnose multiple targets like HIV, dengue fever... An industrial version could be created if the results are conclusive in the coming months. 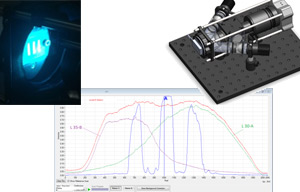