As part of tests to measure force on mechanical parts subject to fatigue cycles, R&D Vision has developed a solution combining synchronised image and analogue data capturing through physical sensors.

The system has two 8MP digital cameras and an analogue signal digitisation card (force sensors...). It is built on our HIRIS software to acquire and playback image sequences and IOTool to control the sensors and acquire data.

All digitised signals are saved in a file for later use with the images saved by HIRIS. For each image in a sequence recorded during a measurement test, the data acquired through the corresponding analogue channels can be overlaid on the images, and the values can be displayed as a graph. 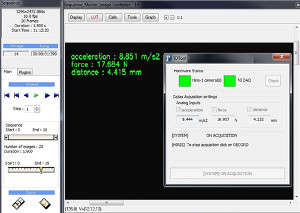