Measurement of angle, speed, size and concentration of droplets

R&D Vision has developed a number of algorithms for image processing in order to determine, in an objective and quantitative manner, certain characteristics of a spray (cone of the spray, length of penetration, wettability / impact).

To determine the impact / wettability we generate a laser plane perpendicular to the direction of the spray at a configurable distance from the exit point of the nozzle. The drops that cross through the plane are imaged in forward motion by a high speed camera. The drops detected during spraying are accumulated on a 2D web to build a standard histogram. The spatial spread of the density of probability of the presence of drops is thus determined to be able to quantify and understand the shape and the proportion of liquid received by a surface at a certain distance from the nozzle. 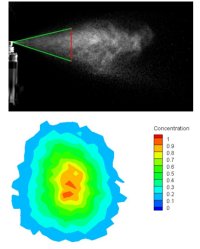 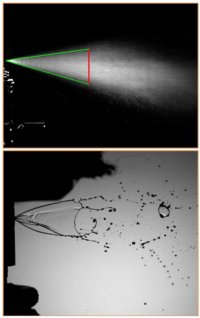